When we first met with the Editor of BBC Three Counties Radio we were given our brief in two parts. The first was the technical brief, driven largely by BBC Standards similar across all similar local radio stations. Compliance with this part of the brief would be relatively simple; provide this number of rooms at these sizes with a given technical performance. The second part of the brief was less easily defined;  it required the building to embody the values of the station, reach out to the listeners and create an environment to get the best out of the station team. That was our challenge as designers.

The building itself was an existing retail unit constructed in 2005 but left as an empty shell. This formed part of a complex with a neighbouring theatre and bars. The internal area it provided was a good match to the technical brief, although not optimum in terms of the shape. It had a mezzanine which would require news stairs and a lift. Its best feature was the front elevation, a floor-to-ceiling glazed façade looking onto Grove Park. This would give the staff inside a fantastic view out, and give the public a view into the workings of the station. The Editor liked the fact they would be on show – accountable, transparent and approachable. 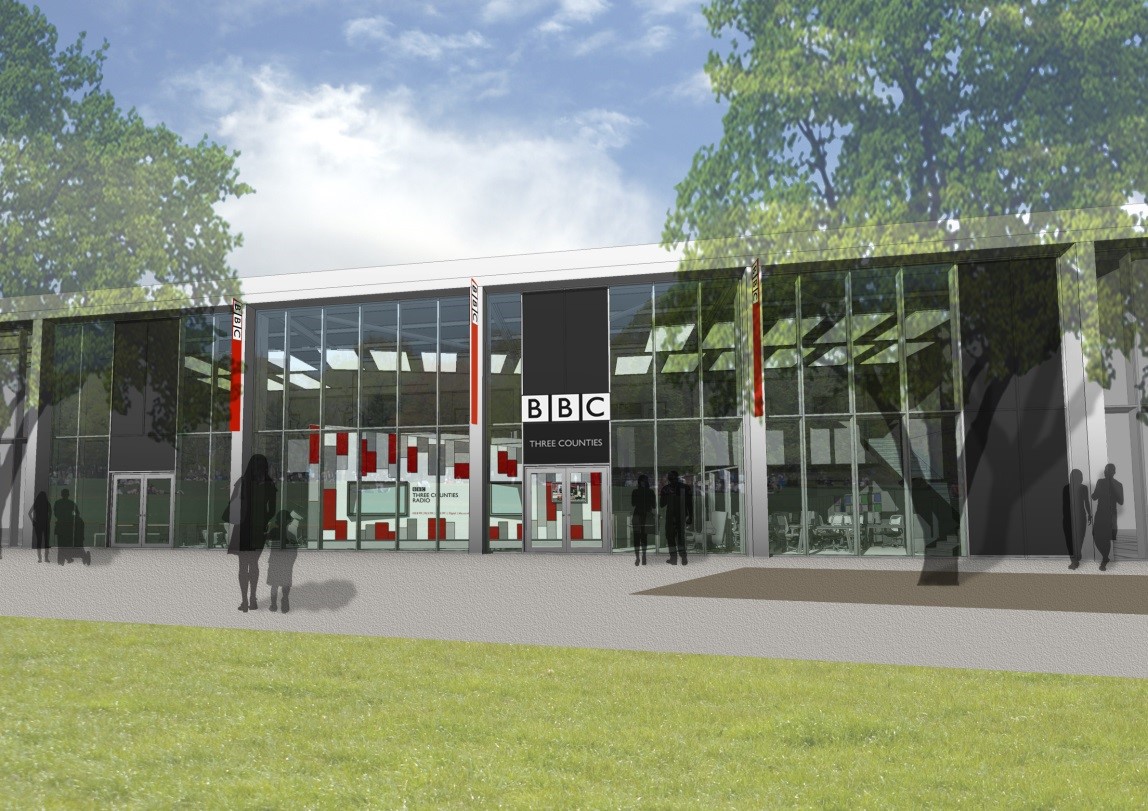 The key technical spaces in the new facility are two studios and an interconnecting operations room (where the producers sit). These have very strict requirements for acoustic control, noise break in, and an array of complex M&E. The remaining space would be typical office space for the newsroom, meeting rooms and a few specialist rooms. However the users wanted all these spaces to have personality and provide more than basic compliance with the technical brief.

When we began to layout the spaces within the existing shell we came up with two options. The first option was based on the standard BBC model, with the studios at one end, opening onto a large open-plan newsroom. This would be the template for any new build facility, but our scheme was not new build and this approach would not have made best use of the opportunities our unit gave us.

The second option placed the studios centrally in the space, reflecting their position at the heart of the operation. It was, after all, a radio studio with supporting offices, not the other way around. This central location also helped to split the remaining double height space in two, giving the newsroom separation from a flexible open space on the other side. This became known as creative working, and also allowed for live band performance for Radio 1’s Introducing programme. By disregarding the standard model, the studios became a special object that made an impact, creating energy and intrigue. 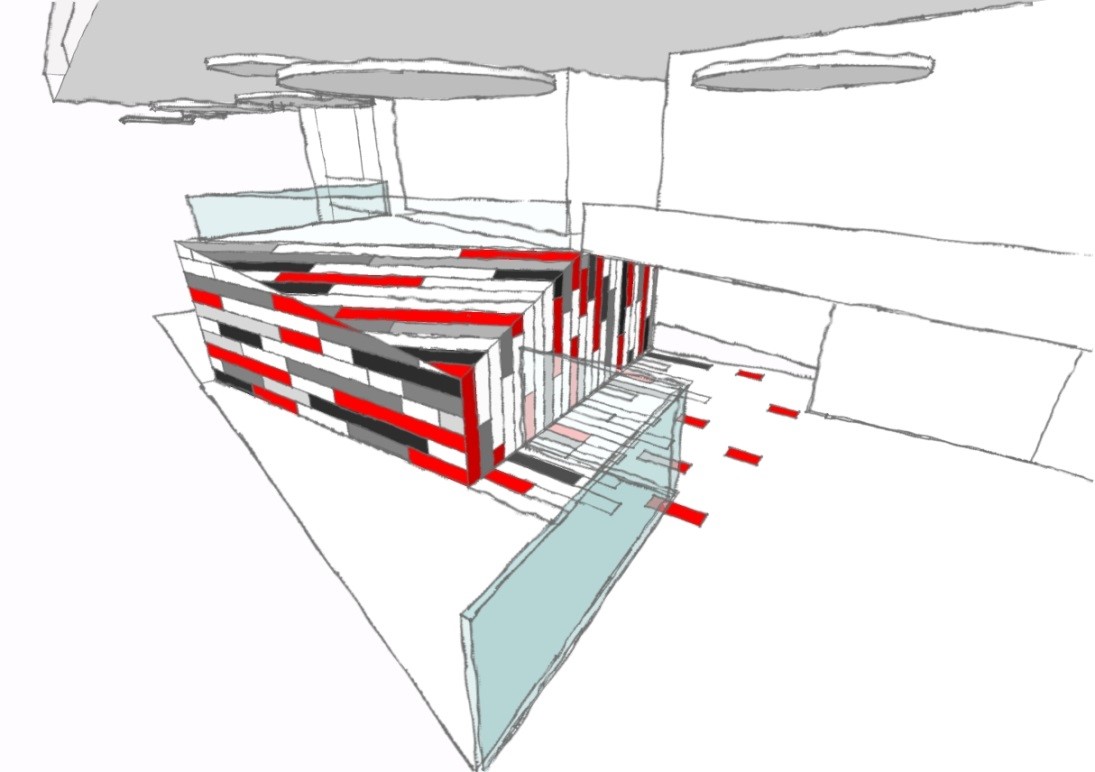 We presented options 1 and 2 for the users to review. They were prepared for option 1 as it answered the standard brief, but they have since told us that they were totally bowled over by option 2. It was a totally unexpected, radical design.  At an instant they could see how it would change their working patterns for the better. Most of all, it made best use of the existing shell, displaying a fun and creative interior without being ostentatious or inflexible. With the studio box reaching forward to the public frontage, an internal window allowed a view into the studio for the benefit of viewers and presenters alike.

Over the following year we developed option 2, with complementary designs for ceiling rafts with lighting, carpet tile patterns, furniture layouts and a cladding pattern on the outside of the studio box. These incorporated local scenes from the three counties, and with a bold design, allowed the remaining space to be simple and business-like. We have since visited the completed building and met the team again. This time we were overwhelmed by their positive feedback and the way the new building has improved their working environment. This positive change impacts directly on the quality of their output and the way they choose to broadcast certain shows, for example they have used the creative working space for live shows, as the atmosphere is relaxed and puts their guests at ease. This space was never in the technical brief. 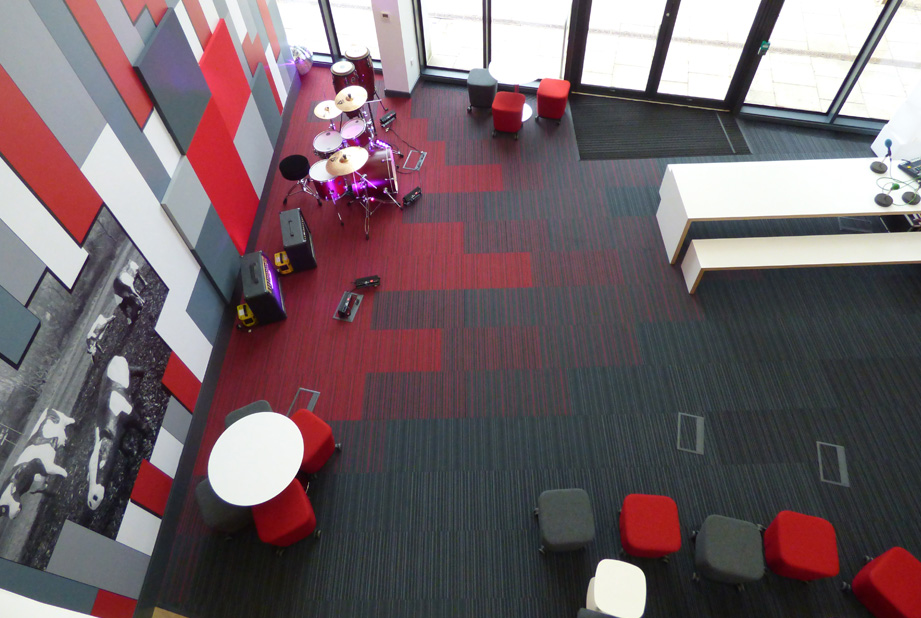 By picking the unconventional approach they took a leap of faith in us as designers to deliver an exciting space along with the technical performance. We are delighted to have repaid that trust with a facility that challenged our skills and has proven to exceed their expectations.